Introduction from the Director
Since the first Biennale in 2014, JIMB has been intended as a forum where, through small printed images, ideas and graphic techniques can develop and artists, studios, art lovers as well as the general public can participate democratically. Over time there is has been a shift in the character of this event, starting from the first Biennale in 2014 to the fourth, the current Biennale. In addition, though membership of the jury has changed from Biennale to Biennale, as far as possible the jury has included both young and more senior artists, those who welcome progressive movements and those who value conventions and traditions, all with the same goal: for JIMB to capture the dynamic of graphic arts as it grows and develops.
In the fourth Biennale the organizing committee and the jury have agreed to provide equal opportunity for work which uses conventional techniques as well as techniques which lie outside usual practices and which were not accommodated in the first three Biennales. This decision was carefully considered from a number of points of view, including the far-reaching impact of the Pandemic which it appears will continue into the future. These last several months have raised our awareness once again that truly the essence of art is how artists at a particular point in time are capable of creating a powerful impact through their work. Graphic art is unique because it can connect the particular strengths of ideas and techniques and can play a role in creating opportunities for everyone, wherever they are and under whatever conditions, where they can create art.
Significant financial support from the Art and Culture Department of the Yogyakarta Provincial Government has made it possible for Organizing Committee of the 4th Biennale to increase the monetary value of the prizes. Also, the jury of the Biennale, in addition to three well-established Indonesian printmakers, for the first time includes a distinguished international artist:  Deborah Chapman, a Canadian artist respected throughout the printmaking world. Her participation on the Jury adds stature to the Biennale and we are grateful for her willingness to serve.  Deborah was one of the winners of the Three Best Works Award in the 2nd JIMB 2016 with a riveting mezzotint entitled ‘Murmure’, 2016. She will participate in Phase I of the selection process. Although a virtual presence now, international participation on the jury is a goal for future Biennales.
Finally, because of the effects of the Pandemic, it was decided that the exhibit of finalists selected by the Biennale jury will be held in April 2021. This is in consideration of the possibility that submission of work, especially from abroad, might take longer than usual because of current conditions.
We realize that keeping the flame of the Biennale alive is no easy task and we need everyone’s involvement. Let’s go forward, create fantastic graphic work, and overcome this Pandemic!
Syahrizal Pahlevi

THEME:
Trans-Pandemic Printmaking; The 4th Jogja International Miniprint Biennale
Since the beginning of 2020 countries and communities throughout the world have faced the same problem, the threat of the Covid-19 Pandemic. As a result, various plans, projects, development activities, and artistic and socio-cultural activities of communities everywhere have been postponed or canceled. Conventional teaching and learning programs and academic activities in schools from kindergartens to high schools and colleges have been suspended. Campuses closed and replaced in person learning with online instruction. Art events, exhibitions, performances, and screenings in public spaces and art galleries are severely constrained. Places of worship and other important gathering places are closed. Physical contact between members of the public has been reduced to a minimum. 'Lockdown', 'social distancing', 'PPE (personal protective equipment), the use of 'thermo-guns', and various signs of restricted access to regions,   cities, and entire countries are only a small sample of the seriousness of the threat of Covid-19, and of various efforts made individually and collectively to break the chain of transmission of the virus.
However, amazingly, people of various ages and backgrounds are always able to create new metaphors, to creatively represent the extraordinary things or events they experience. Creative people everywhere are moved to express their experiences through various media including: sound, movement, words, appearance, and their own bodies. What is phenomenal, globally, in response to lock downs and social isolation is the emergence of creative, innovative works that have been able to break through various limitations imposed by social-distancing. Artwork, designs, performances, animations, short films, novels, and music have sprung up from various communities, including communities that have developed online. It turns out that strict limitations make people creative; they have been able to create new ways that are trans-border, trans-parochial, trans-disciplinary, and trans-media. Indeed, the prefix 'trans', which means to pass, go beyond, cross and overcome, has become one of the key words of this new era.
Printmaking is a branch of art practice that is never devoid of images and texts which are created in order to be reproduced through the printing process. By their nature prints have the potential to appear, equally original, in several places at once. Metaphoric phrases about 'what is happening here and now’ can be physically characterized and disseminated online. Images, texts, or striking text drawings can be made either with simple materials and equipment or with materials and equipment specifically designed for industrial printing purposes. Greatness in a print/graphic work can be achieved through an approach that is simple and minimalist or sophisticated and technical.
The most important thing that printmakers are able to demonstrate is their intellectual-creative skills in transforming specific ideas or insights into a reality they feel an urgency to express through the process of transferring images to print media for reproduction. What is significant is the ability of the creator, the printmaker, to trans-mediate an insight into a medium.
In difficult conditions, like the Covid-19 Pandemic, people must be able to transform challenging situations into environments conducive to various positive possibilities. Through art, in this context printmaking, people can transform any particular idea, including ideas related to the Pandemic, into something unique.
This discussion is a prologue to the 4th Jogja International Miniprint Biennale (JIMB) 2020 and explains why the selection process and Biennale exhibition will take place in the first quarter of 2021. In response to the Covid -19 Pandemic, JIMB 2020 is inviting printmakers everywhere to submit graphic works to this trans-national event. (Please see registration details below.) We believe that the works submitted will indeed be the fruits of creativity, related directly or indirectly to conditions under the Pandemic.
We also believe that in every community there are always creative ways to represent events and phenomena that affect them both individually and communally. The Organizing Committee of JIMB 2020 looks forward to receiving work from printmakers everywhere, whether the work uses conventional technical methods or trans-media approaches; each has its own uniqueness and strength. These two characteristics are like the two different personalities represented in ancient Greek mythology by the gods Apollo and Dionysius; both have characteristics and traits that are far different from one another, but both have their own strengths and abilities.
Thus we enthusiastically invite printmakers from all parts of the world to submit work which signifies that we are not mere subjects of the Pandemic. Through printmaking we have creative techniques to transcend obstacles and limitations and to graphically characterize the dramas triggered by Covid-19
Prof. Dr. M. Dwi Marianto, MFA,
Jury Chairperson


Terms and Conditions
There is no entry fee for registration
The Biennale is open to Indonesian and international artists who have reached their 18th birthday by 25 October 2020.
Work submitted must respond to the theme established by the jury.
Work submitted must have been produced between 2019 and 2020.
Work submitted must be print work on paper.
Maximum paper size of actual work is 20cm. x 20cm. Matrix or image size is free.
Work using all types of print techniques may be submitted i.e., images created by a form of printing, but not involving direct drawing on a medium. Work using conventional techniques including woodcut, linocut, rubber cut, moku hanga, collagraph, stamp art, stencil, silk screen, monotype, lithograph, mezzotint, etching, dry-point, digital techniques including digital prints, risograph, offset, and photocopy as well as personal techniques including body and finger prints are all eligible. Monotype, monoprints as well as work using either a single technique as well as mixed printing techniques may be submitted.
Techniques which are disallowed include hand-coloring, hand touching, painting or drawing added to a printed work, collage or any other technique involving drawing directly on paper or other medium.
All work submitted must include an edition number and the signature of the artist. If the work is a monoprint, monotype, or a unique print, the edition number should be written as “1/1” and also include the signature of the artist.

Judging and Selection
The selection process will be carried out in two stages. Phase I will be based on a photographic image of the work submitted via email. This Phase will be carried out by the four members of the jury, the three Indonesian members and the international member. Artists whose work passes Phase I of the selection process will be asked to submit the original work to the jury. Phase II selection will be carried out by in Yogyakarta by the three Indonesian members of the jury. This Phase will identify works which will be exhibited at JIMB 4. At the same time the Jury will select the prize winners

Submission of Work Phase I
Artists may submit a maximum of three works each in a jpeg file 2 MB  and 300 dpi resolution. Each file must include: file number, artist’s name, title, year of production, graphic technique used, dimensions of work, and edition number.  I.e: File 1_ name of artist, title,………………; File 2_name of artist,…..; File 3_name of artist,…………
A separate file containing a concept statement or description of the work in 100 words or less as well as a short biographical profile should also be included with the submission.
The photo images, concept statement, and Phase I registration form (download form at www.jogjaminiprint.weebly.com ) should be submitted to: jogjaminiprints@gmail.com  by 30 October 2020 with subject: Phase I JIMB.
Artists whose submission is successful at Phase I will be informed via email. Successful submissions will also be announced on the JIMB website on 7 November 2020. Only artists who pass the Phase I selection will be asked to submit their original work. 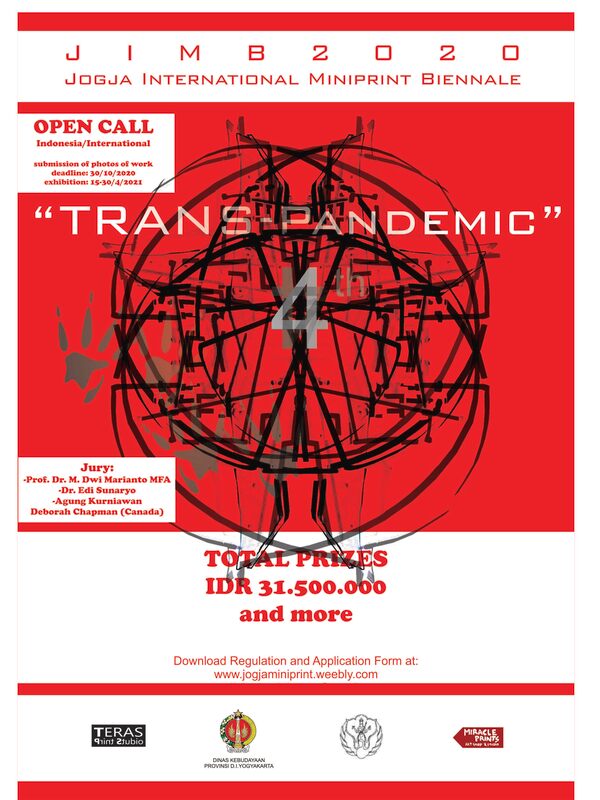